One of the primary and most distinctive fixtures of any Catholic church is a box or cabinet, typically made of gold placed in the front and center of a church. The exact shape varies, but you will most often find a red vigil lamp lighted next to it.

As Catholics we call the box a tabernacle and it contains the “holy of holies,” Jesus present in the Eucharist.

The word tabernacle means “dwelling place” and refers to the “tent of meeting” that the Israelites built to facilitate their worship of God in the desert (Exodus 26). God commanded Moses’ brother Aaron, the chief priest, to offer  sacrifice within the Tabernacle, and specified that three things be kept inside:

Additionally, within the Ark of the Covenant, Moses was to put some of the manna that God gave to the Israelites. The manna is often described in the Old Testament as the “bread of angels,” and was a heavenly bread that the people of Israel ate in the desert (Psalm 78:25).

Both the manna and the Bread of the Presence (a sacrificial offering of bread that was eaten by the priests, along with wine) have distinct parallels to the Eucharist that Catholics consume, and are seen as prefigurements of it.

When celebrating the Mass, the early Christians knew that they could not simply dispose of the left-over Eucharistic bread and at first, because they were being persecuted and did not have churches, they distributed all the remaining hosts to be carried to the sick and home-bound.

When the persecution ended Christians started to build churches and, at the same time, tabernacles to house the reserved Blessed Sacrament. The first tabernacles were often shaped like a golden dove within a tower suspended over the altar. According to the Catholic Encyclopedia, by the Middle Ages there were four chief methods of preserving the Eucharistic bread.

in a cabinet in the sacristy, a custom that is connected with early Christian usage; in a cupboard in the wall of the choir [sanctuary] or in a projection from one of the walls which was constructed like a tower, was called Sacrament-House, and sometimes reached up to the vaulting; in a dove or pyx [a round container made of precious metal], surrounded by a cover or receptacle and generally surmounted by a small baldachino, which hung over the altar by a chain or cord; lastly, upon the altar table, either in the pyx alone or in a receptacle similar to a tabernacle, or in a small cupboard arranged in the reredos or predella of the altar.

It wasn’t until the 17th century that more specific guidelines were laid down and tabernacles began to resemble those that we see in our churches today.

The Catechism further explains the history of the tabernacle and how “the tabernacle was first intended for the reservation of the Eucharist in a worthy place so that it could be brought to the sick and those absent outside of Mass. As faith in the real presence of Christ in his Eucharist deepened, the Church became conscious of the meaning of silent adoration of the Lord present under the Eucharistic species. It is for this reason that the tabernacle should be located in an especially worthy place in the church and should be constructed in such a way that it emphasizes and manifests the truth of the real presence of Christ in the Blessed Sacrament.” (1379).

As mentioned above, the use of a tabernacle in Catholic churches rests solely on the doctrine of the Real Presence of Christ in the Eucharist, the knowledge that Jesus himself is truly present under the appearances of bread (and wine). In other words, the tabernacle is not used in a symbolic way, to symbolize God’s presence among us, but in a real way (like the Tabernacle of the Old Testament) to house and protect the real presence of God in the Eucharist.

This is also why Catholics genuflect when passing the tabernacle. We do so in honor of the real presence of Christ present in the Eucharisticic bread reserved and protected in the tabernacle. The vigil lamp burns as a sign of Christ present. On Holy Thursday night, after the Mass of the Lord’s Supper, the Blessed Sacrament is removed from the main tabernacle to an altar of repose elsewhere in the church, for a time of adoration. For the period from Holy Thursday night through the beginning of the Easter Vigil on Holy Saturday night, a time when we recall Jesus’ death and burial, the tabernacle is empty, with the door left open and the vigil lamp extinguished.

Without the Eucharist, the tabernacle is simply an empty gold box.

The Baldacchino at Sacred Heart Church 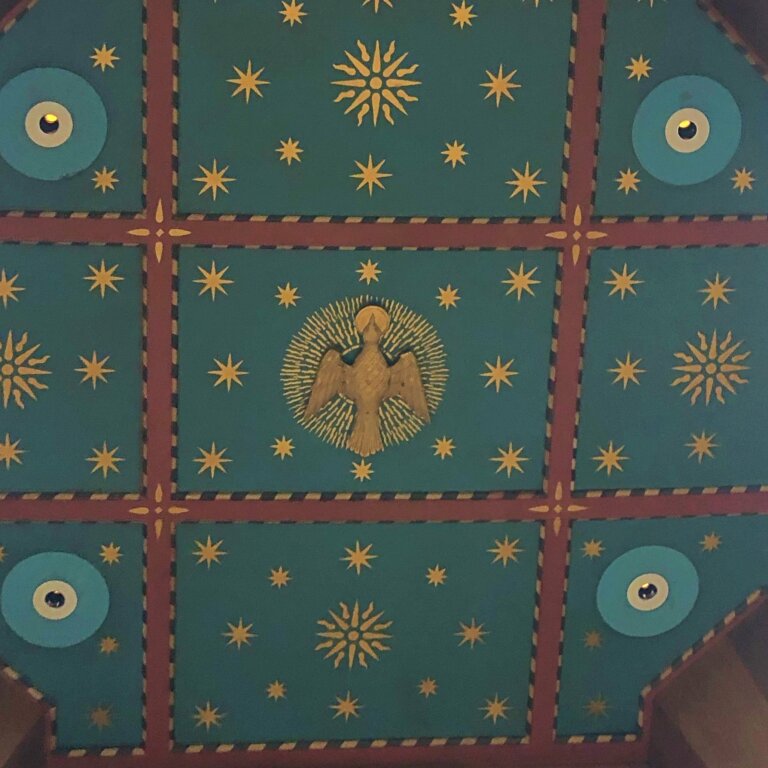 Our church is one of the last remaining in the Archdiocese of Newark to have a baldachinno (canopy over an altar)
over the tabernacle in the sanctuary of the church. The Dove of the Holy Spirit is clearly present as is the rising sun. Both of these symbols have been important to church architecture from the earliest times.

An ancient church scholar, Tertullian wrote: "The house of our dove is simple; it is found on elevated sites, is always open, and is placed toward the light. For the image of the Holy Spirit loves the direction of the rising sun, which is the symbol of Christ." Tertullian here calls the church "the house of our dove," apparently meaning by the expression "our dove" the home of the Eucharist, which in many places was kept in a vessel having the form of a dove, considered as the symbol of the Holy Ghost.

If you want to go deep on Tabernacles and Baldachins, check out this article.

The Tabernacle - It's History, Structure and Custody

The symbols on the Tabernacle at Sacred Heart Church 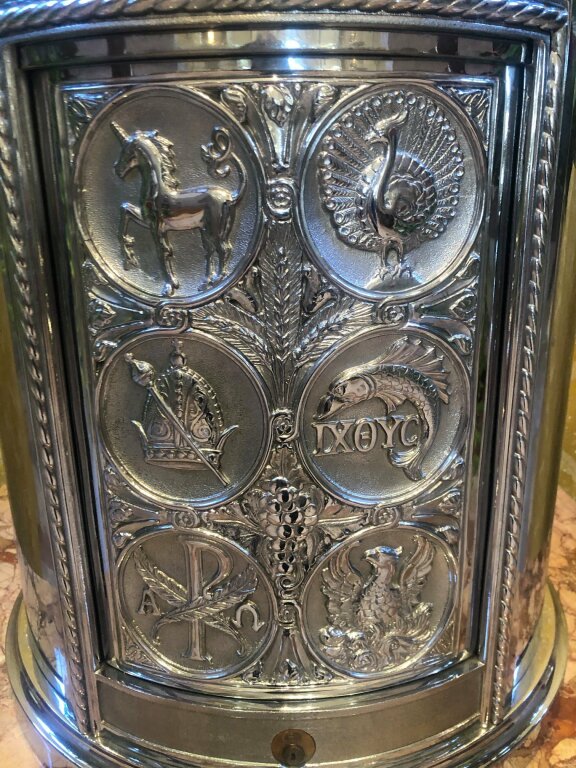 Close-up of the six symbols depicting aspects of Christology on the Tabernacle at Sacred Heart. 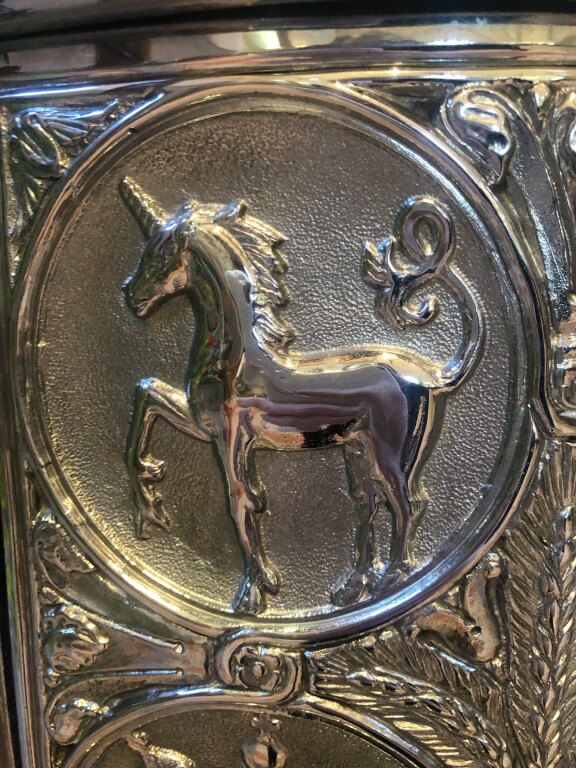 The unicorn as many know is a small horse or goat with a single spiraling horn on its forehead.

This magical creature first appeared in early Mesopotamian artworks, and according to Britannica was also referred to in Indian and Chinese ancient myths. Despite its origins, some may be surprised to learn the unicorn was adopted into Christian allegorical art in the middle ages.

The story goes, as noted by Getty, hunters would attempt to hunt the mysterious and powerful unicorn without success. In order to lure it into submission, they would place a maiden virgin in the middle of the forest.

The moment the unicorn sees her, he embraces her and covers her body as protection—allowing himself to be slain by hunters.

The maiden represents the Virgin Mary, and the unicorn represents Jesus who offers his life as a sacrifice to protect the vulnerable.

You won’t look at unicorns quite the same way again.

Horn of Salvation - Christ as Unicorn

The Mitre and Staff 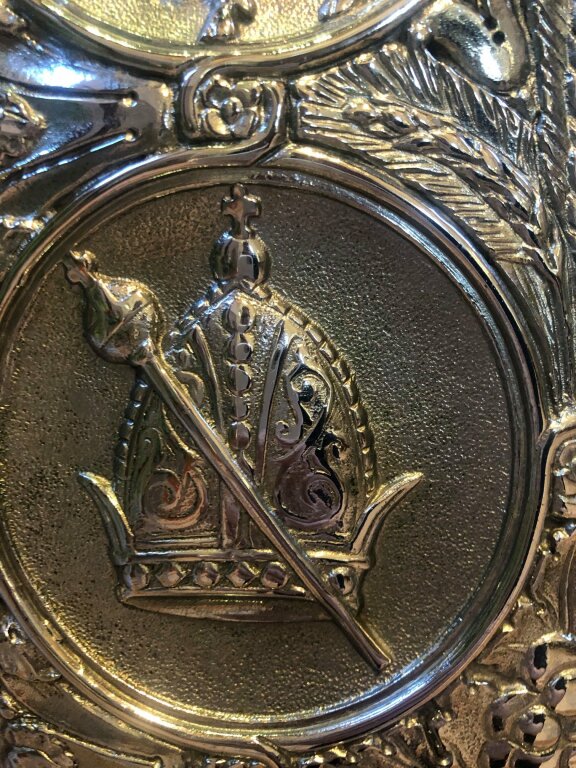 The Mitre and Staff represent the Kingship of Christ.
OUR supernatural life of Divine Grace comes to us from Our Lord Jesus Christ, Head of His Mystical Body, the Catholic Church, while we continue to receive our disordered natural life from the first Adam.

"For, if by one man's offense, death reigned through one: much more they who receive abundance of grace, and of the gift, and of justice, shall reign in life through one Jesus Christ" (Rom. v. 17).

The Kingship of Christ: According to the Principles of St. Thomas Aquinas by Rev. Denis Fahey, C.S.SP., B.A., D.Pa., D.D. Professor of Philosophy and Church History, Senior Scholasticate, Blackrock College, Dublin 1931 With Nihil Obstat and Imprimi Potest THE KINGSHIP OF CHRIST

The Chi Rho and the Alpha and the Omega 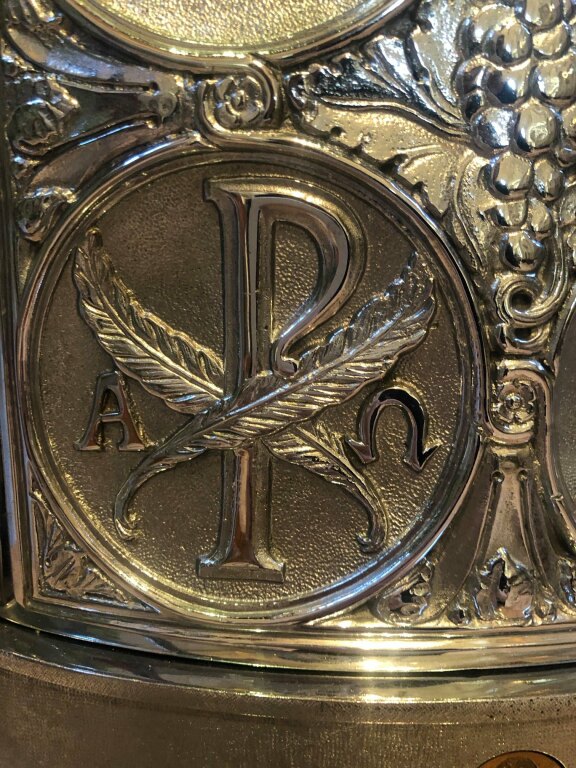 The Chi Rho is a Christian symbol for “Christ” written by superimposing the two Greek letters “Chi (X)” and “Rho (P)” which are the first two letters in Greek of the name of “CHRist.”

The History of the Chi Rho symbol

Alpha and Omega (in Scripture) 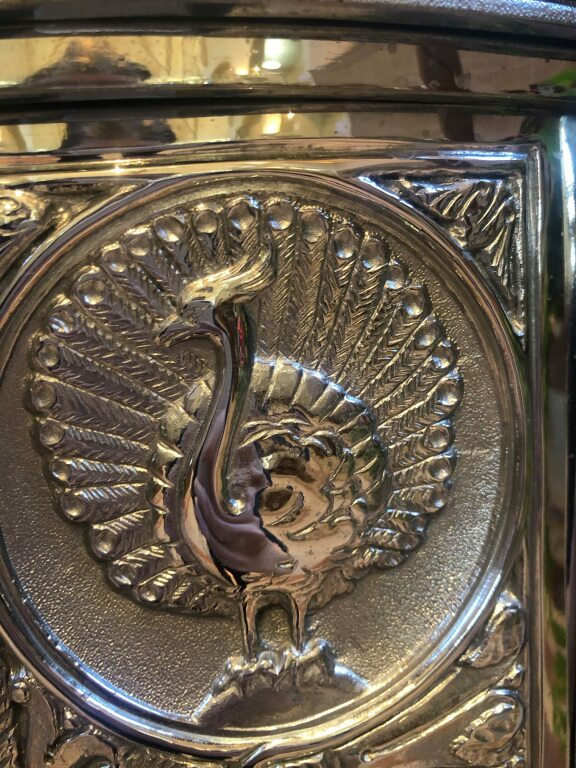 Peacocks often appear in early Christian art as a symbol of the Resurrection and Eternal Life. There are various levels to this symbolism.

In medieval times, it was thought that peacocks molt (shed their feathers) every year, and the new ones that grow are more beautiful than the old ones. Along with this idea, medieval legends included the theory that the gorgeous colors of a peacock’s feathers came from a special diet: It was believed that peacocks could kill and eat poisonous serpents, ingesting the poison and transforming it into the colors of their feathers.

This too contributed to their being an apt symbol of Christ’s Resurrection, since Christ “became sin” ( 2 Corinthians 5:21) for us on the Cross, but then rose from the dead with his glorified body and wounds having conquered the powers of evil.

Why are Peacocks Considered Symbols of the Resurrection? 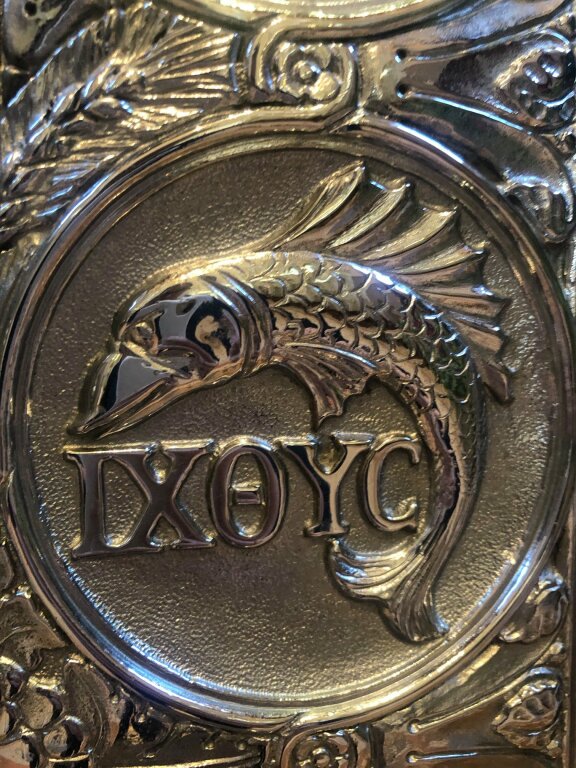 The word is also the Greek word for “fish," icthus, ἰχθύς which when spelled in capital letters in Greek is ΙΧΘΥΣ.

Jesus used the metaphor to represent evangelism in the proclamation of the gospel by which people are saved from their sins. Christians began using the fish as a symbol of Christianity in the first century.

What does IXOYE mean? 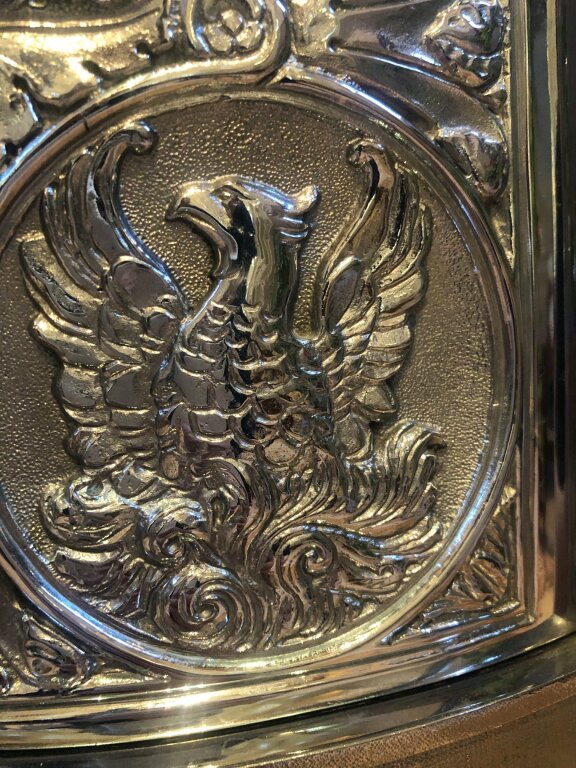 The ancient Greeks and Romans (as well as other cultures around the world) believed in the existence of a “firebird” who was given new life after dying in flames and rising reborn from its own ashes. This type of rebirth through fire was the only mode of reproduction for the mythical bird.

Besides being referenced in various mythologies, the bird’s presence is also noted in the Old Testament. Job used the bird to describe his own situation, “In my own nest I shall grow old; I shall multiply years like the phoenix” (Job 29:18).

While most Christians saw it as a symbol of the resurrection, there were a few who recognized the bird’s virginal way of regenerating and found it to be an appropriate symbol of Jesus’ miraculous conception within the womb of Mary.

The phoenix is found throughout the history of Christian art, especially during the medieval period, and remains a beautiful symbol that still captures the fascination of the modern world.

This is how the phoenix became a Christian symbol