The words “baptistery” and “font” are often used interchangeably, yet each has a distinct meaning. Properly speaking, the term “baptistery” belongs to the building, chapel, or place where baptisms occur. The “font” is the actual vessel where the water of baptism is poured or contained. Many baptisteries in older cities are buildings separate from a church or cathedral, within which the font is located and the rites are celebrated. Perhaps surprisingly, several of the Church’s books still presume the possibility of a baptistery that is erected apart from the main body of the church. The Book of Blessings gives several instructions on the topic (1083-1084) and the General Introduction to Christian Initiation notes that the baptistery may be “either inside or outside the church” (25). Sacred Depth: Baptismal Font as Place of Re-creation

The second gold box is not another tabernacle, but it does hold three very sacred items. The box is called an ambry, from the Latin armarium; a type of small closet or cupboard. It holds three holy oils that are used for various sacraments. These oils are blessed once a year by the bishop at what is called the Chrism Mass during Holy Week, and then distributed to all the parishes in his diocese. The first oil blessed is the Oil of Catechumens, which is used to anoint those to be baptized into the Catholic faith. The second oil is the Sacred Chrism, commonly used immediately after Baptism, but also at Confirmation and Holy Orders. The last oil blessed by the bishop is the Oil of the Infirm and is used by priests for the Anointing of the Sick. The containers that hold the oils are often marked with the abbreviations O.C., S.C., and O.I. 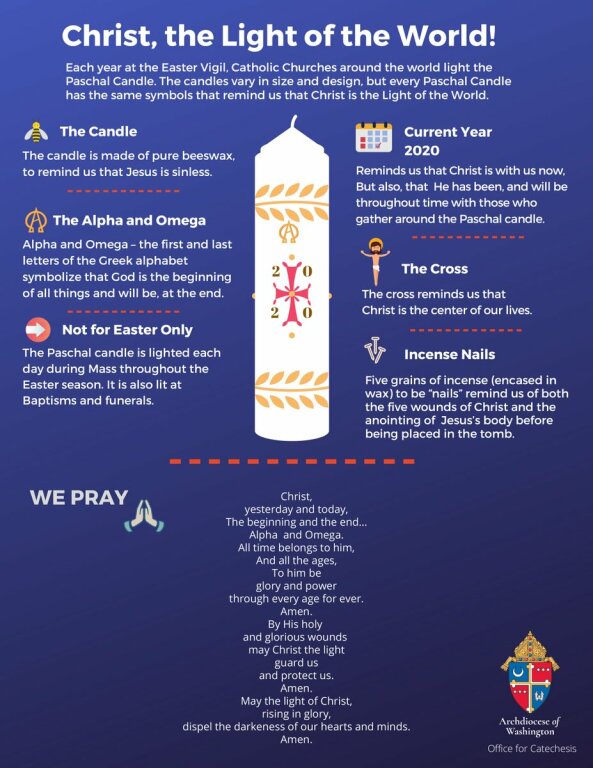 the Light of the World. The pure beeswax of which the candle is made represents the sinless Christ who was formed in the womb of His Mother. The wick signifies His humanity, the flame, His Divine Nature, both soul and body.

Five grains of incense inserted into the candle in the form of a cross recall the aromatic spices with which His Sacred Body was prepared for the tomb, and of the five wounds in His hands, feet, and side.

During the Easter Vigil on Holy Saturday night the priest or deacon carries the candle in procession into the dark church. A new fire, symbolizing our eternal life in Christ, is kindled which lights the candle. The candle, representing Christ himself, is blessed by the priest who then inscribes in it a cross, the first letters and last of the Greek alphabet, (Alpha and Omega `the beginning and the end') and the current year, as he chants the prayer below; then affixes the five grains of incense.

The Easter candle is lighted each day during Mass throughout the Paschal season until Ascension Thursday.