On Sunday, June 23, 2019, the Feast of Corpus Christi, Catholics from the Archdiocese of Newark walked in procession with the Blessed Sacrament from Sacred Heart Church in Bloomfield to the Cathedral Basilica of the Sacred Heart in Newark.

Our motivation was simple, to unite the people of God behind the one true and holy gift that unites us all to his divine nature at every Catholic mass, the Holy Eucharist.

We began at 2pm, with about 75 pilgrims and including clergy, Pastor Fr. James Brown(pastor), Fr. Lukasz Rokita, and Deacon Jerry Rossi from Sacred Heart with additional assistance from Fr. Ignatius, a visiting Domincan priest from the Archdiocese of Washington, DC. The Eucharistic processional canopy was carried by members of the Knights of Columbus Montclair Council and thurifer and acolites drawn from the altar servers ministry at Sacred Heart. The music department lead the singing of hymns, including chant and modern versions of four of the five of the hymns written by St. Thomas Aquinas for Pope Urban IV’s institution of the Feast.

We were escorted along the route by Bloomfield police officers directed by Special Operations Division Commander: Lt. Naomi Zepeda, and we transitioned seamlessly at the Newark border at 13th Street to the officers of Newark PD with the assistance of Lt. Danny Costa. People in businesses, homes and vehicles along Bloomfield Avenue, were stopped in their activities to witness the Procession along the route. Many of our pilgrims were queried as to the meaning, and were able to witness in a quiet way to interested onlookers. It was a powerful reverent testimony to the streets. Some people along the way asked if they could join our procession, and we gladly invited them and shared our worship aides.

At the corner of North 8th Street, and Bloomfield Avenue we were joined by a very large number of pilgrims from St. Francis Xavier, including Fr. Jan Sasin and Fr. Cayetano Moncada, Sisters from the Missionaries of Charity and altar servers and members of their various ministries from the Church of St. Francis Xavier. The procession then began singing and praying in both Spanish and English and trailed city three blocks along Bloomfield Avenue. We had grown to almost 400 pilgrims by this point, and were halted by the Newark Police at the corner of Ridge and Bloomfield Avenue, to allow the large group time to all catch up to turn onto Clifton Avenue. At this time, the Catholic group of pilgrims joined in finishing the last two decades of the rosary, the 4th in Spanish, and the 5th in English. When we did go to Clifton Avenue, we were directed into the street, and stopped traffic down the avenue for a long while. Singing resumed on Clifton Avenue, and the leaders of both the Spanish community and the English community lead their congregations in their own familiar songs. However, when we turned towards the Cathedral Basilica, the two song leaders immediately began “Pange Lingua” in Latin to join their communities together symbolically in one voice. The Cathedral rang out in singing from all, as the Blessed Sacrament was placed on the altar in the Cathedral.

Just before the conclusion of the Benediction Service, Fr. Jim thanked all who had participated, and expressed his joy at the overwhelming turnout for the procession. At this time, Bishop Manuel Cruz, also thanked the pilgrims and welcomed them all to the Cathedral, and reflected on the importance to the witness that Christ presence in the Blessed Sacrament is the only remedy for the emptiness in all of humanity’s hearts.

At the conclusion of Benediction, the communities joined together in singing and then embraced and parted ways as brothers and sisters in Christ. We are very grateful to all who participated, the police escorts from Bloomfield, Newark and the Essex County Sheriff, especially Detective Rachel Vaz, and the clergy, staff and lay ministers at Sacred Heart, St. Francis Xavier and the Cathedral Basilica and the Archdiocese of Newark Office of Evangelization and Communications, who made this possible. We were also grateful for the assistance Regional Manager Lana Velez of Relevant Radio, in all her assistance in setting up interviews and getting the word out to the community, as well as generous sponsorship of baseball hats and tote bags for the pilgrims to use to carry their personal items. 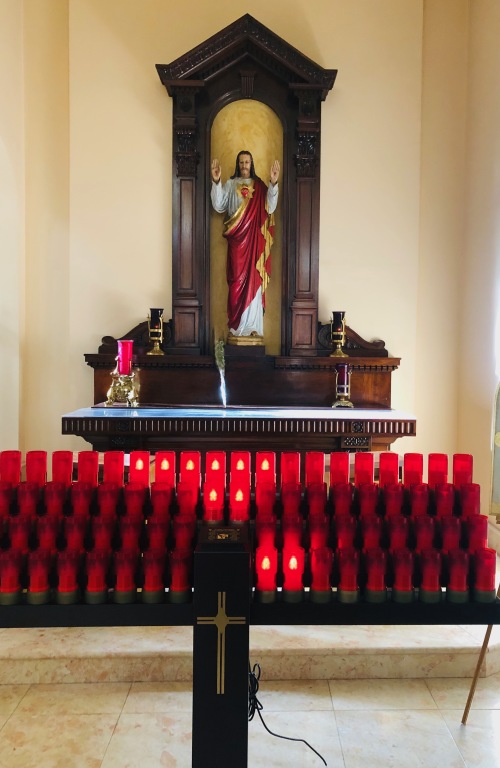 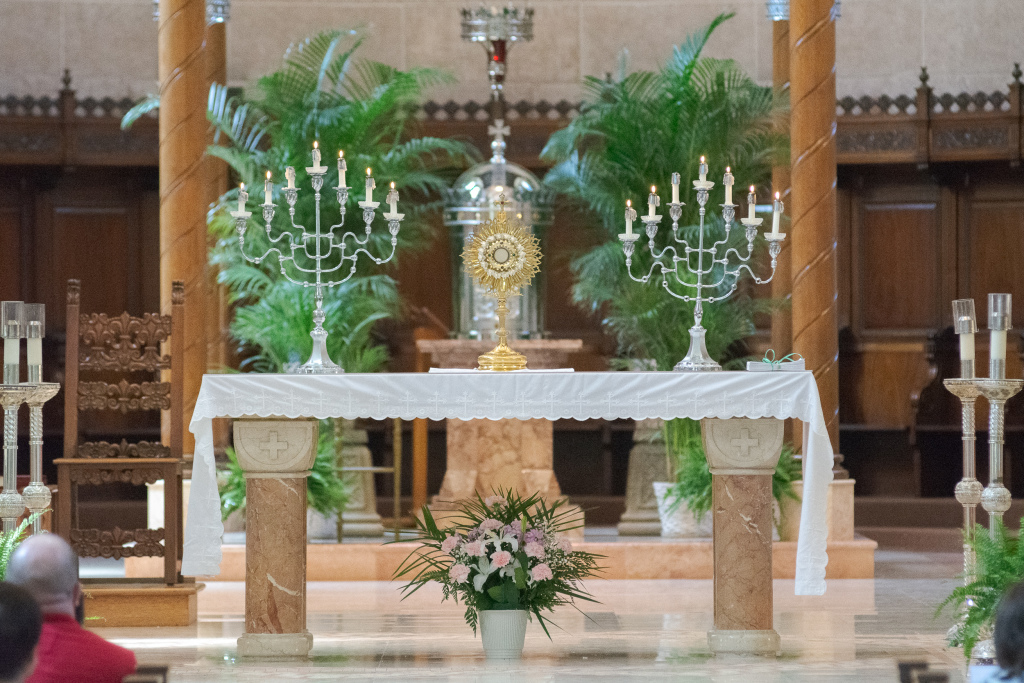 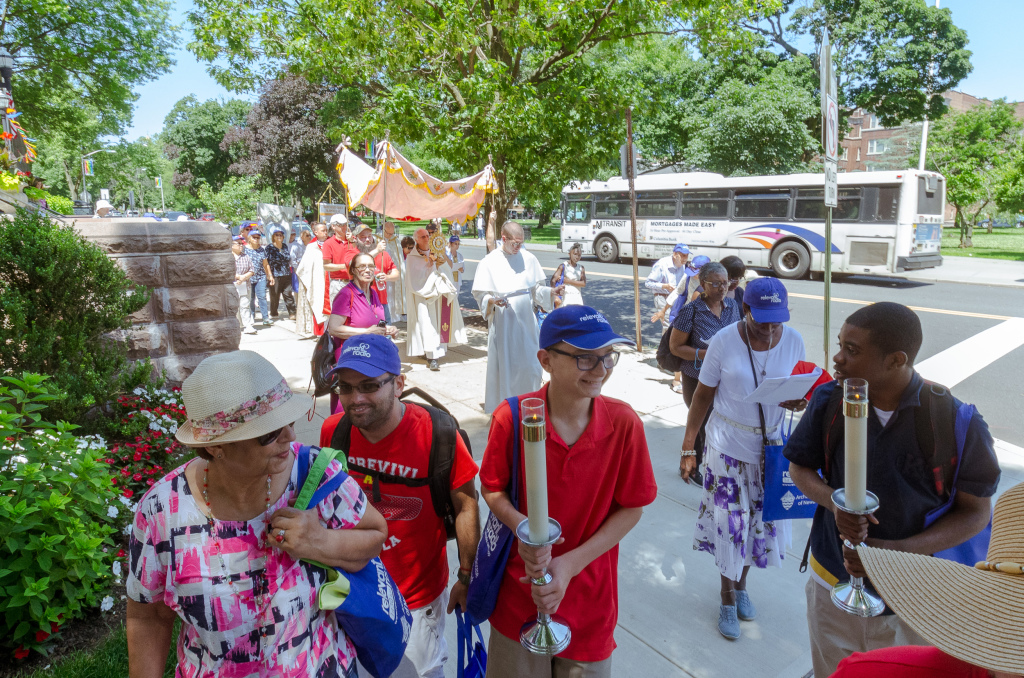 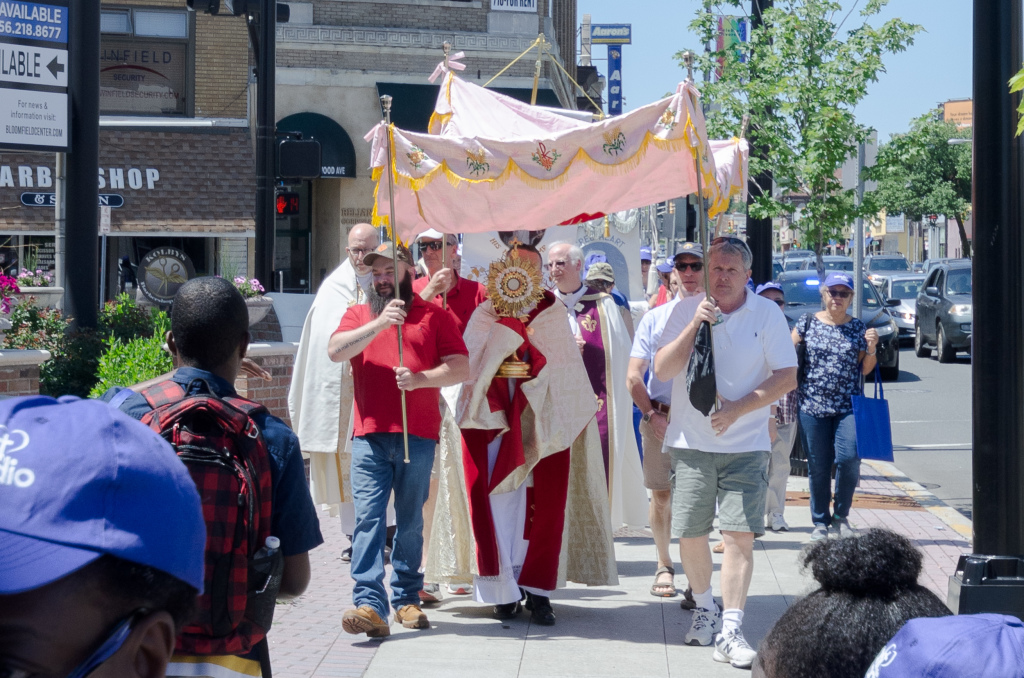 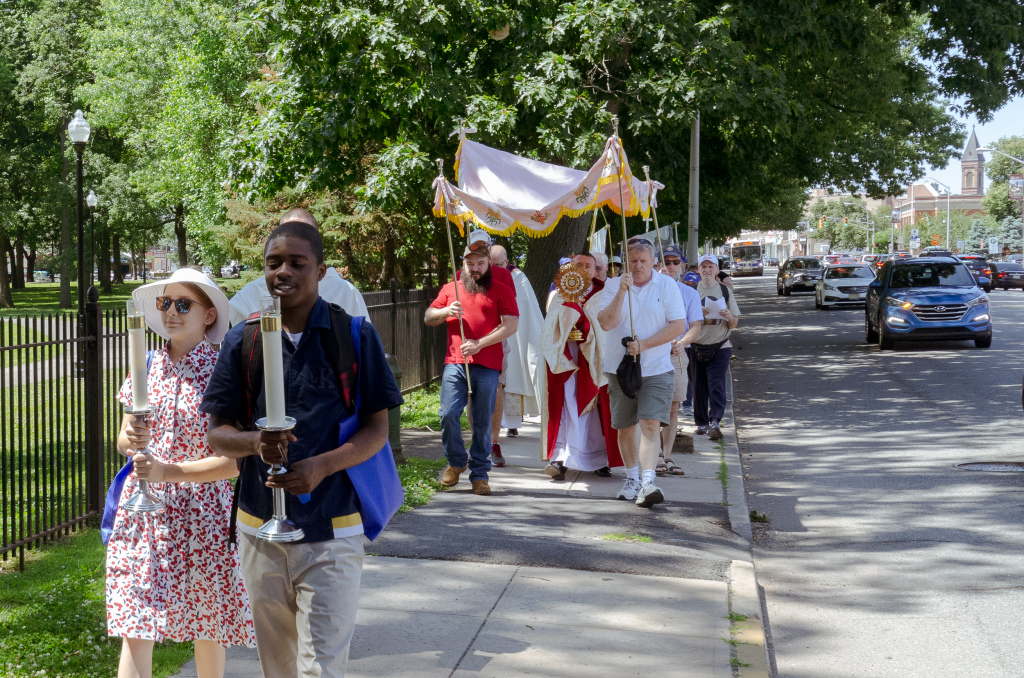 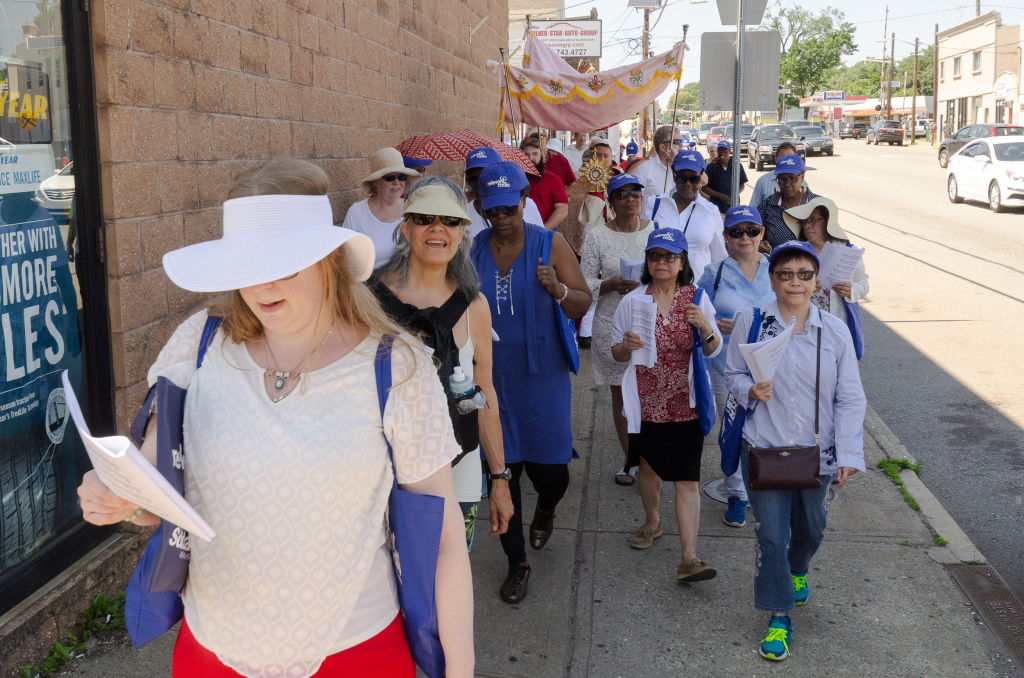 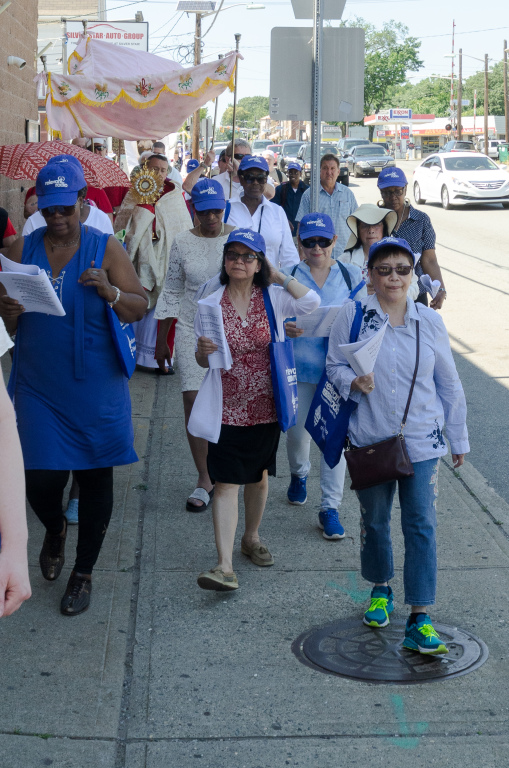 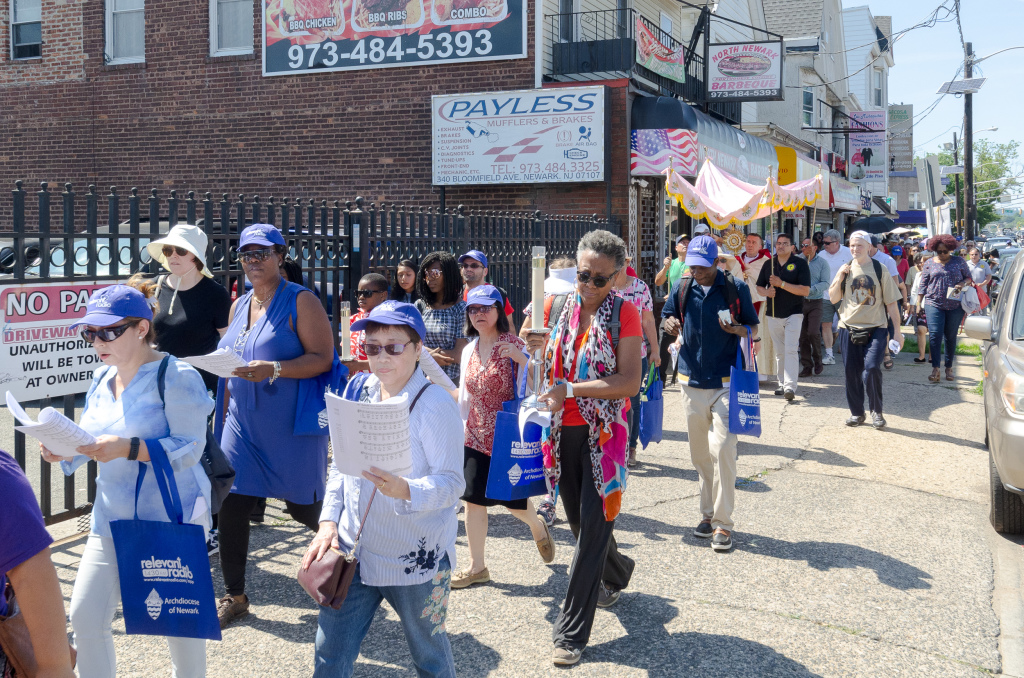 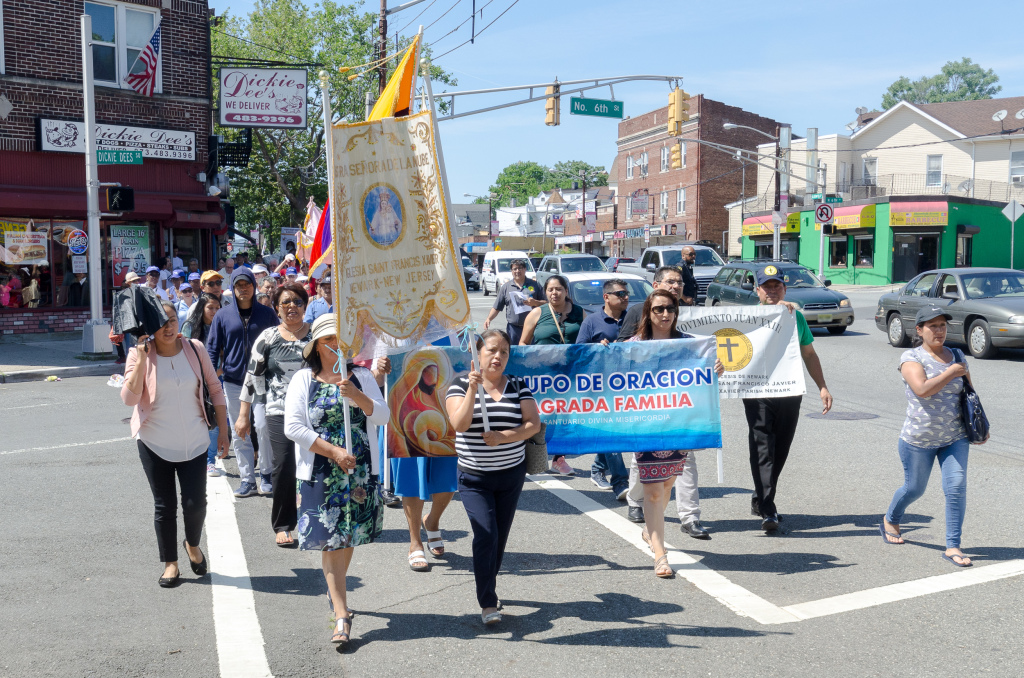 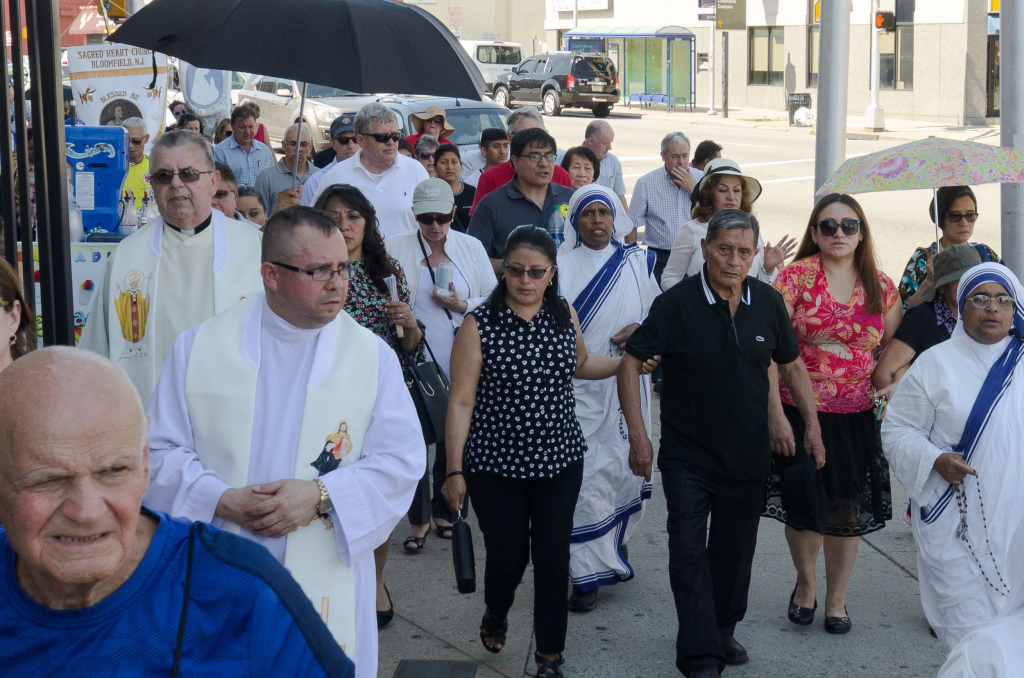 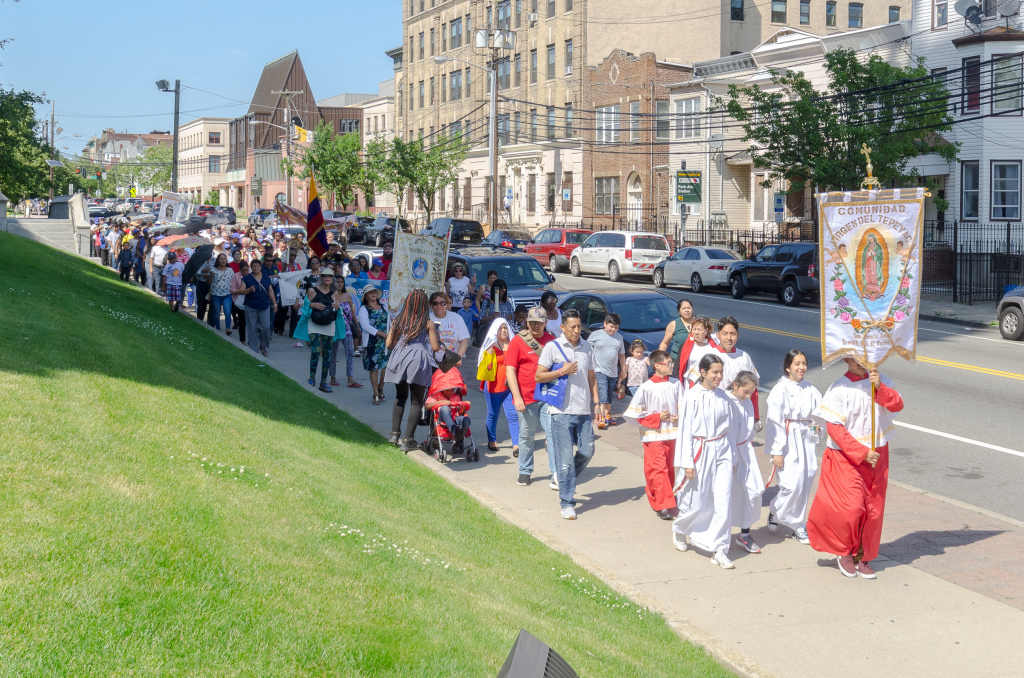 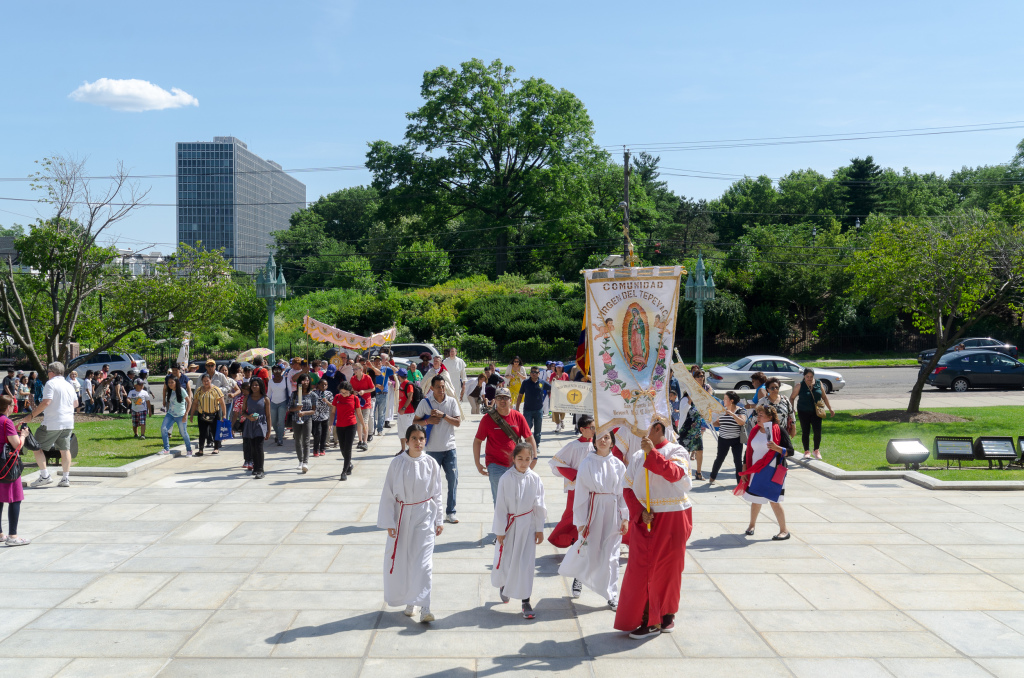 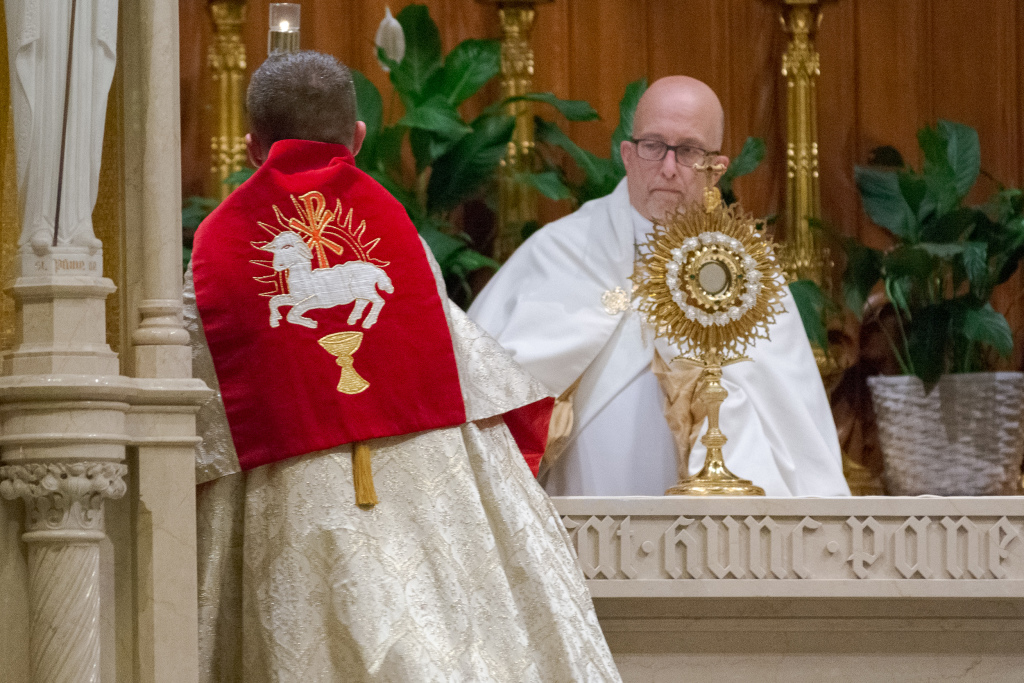 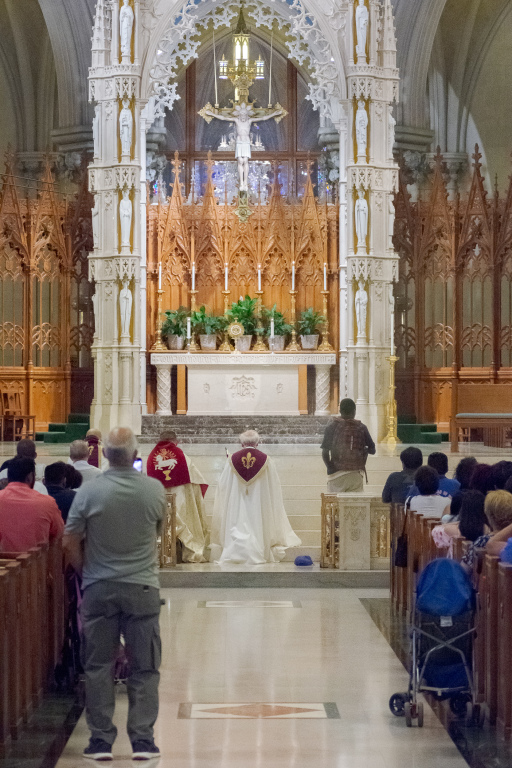 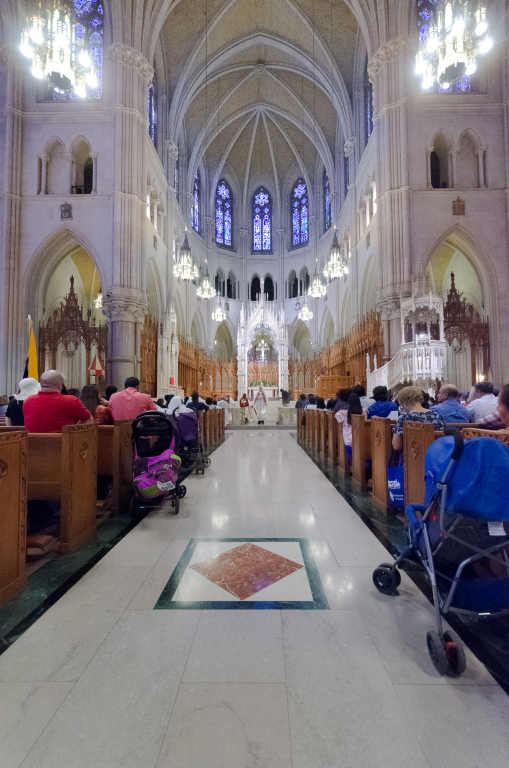 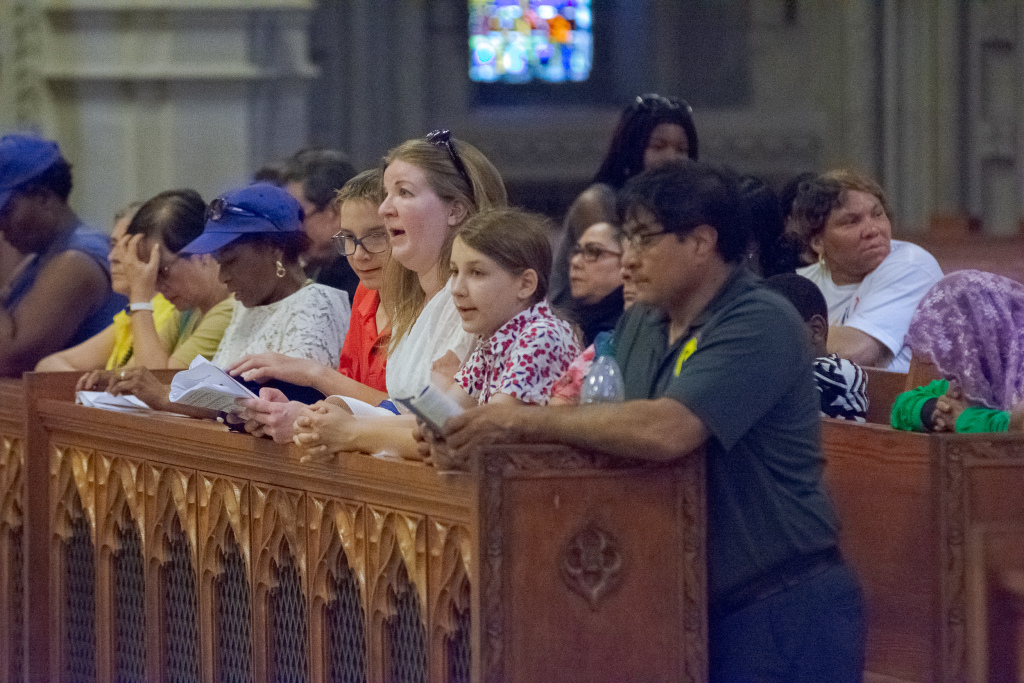 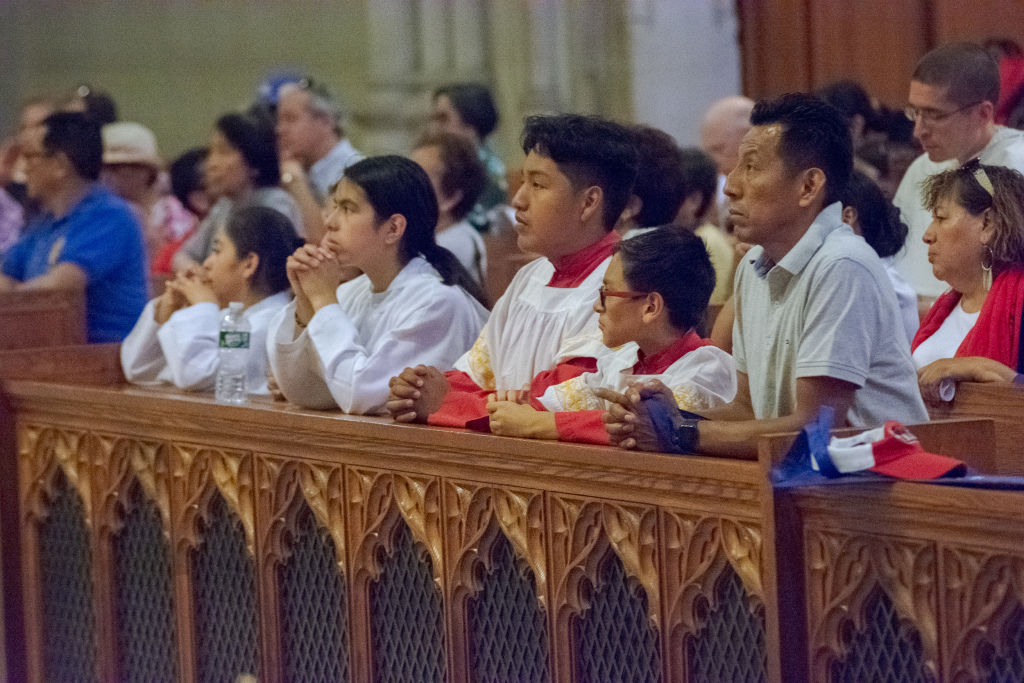 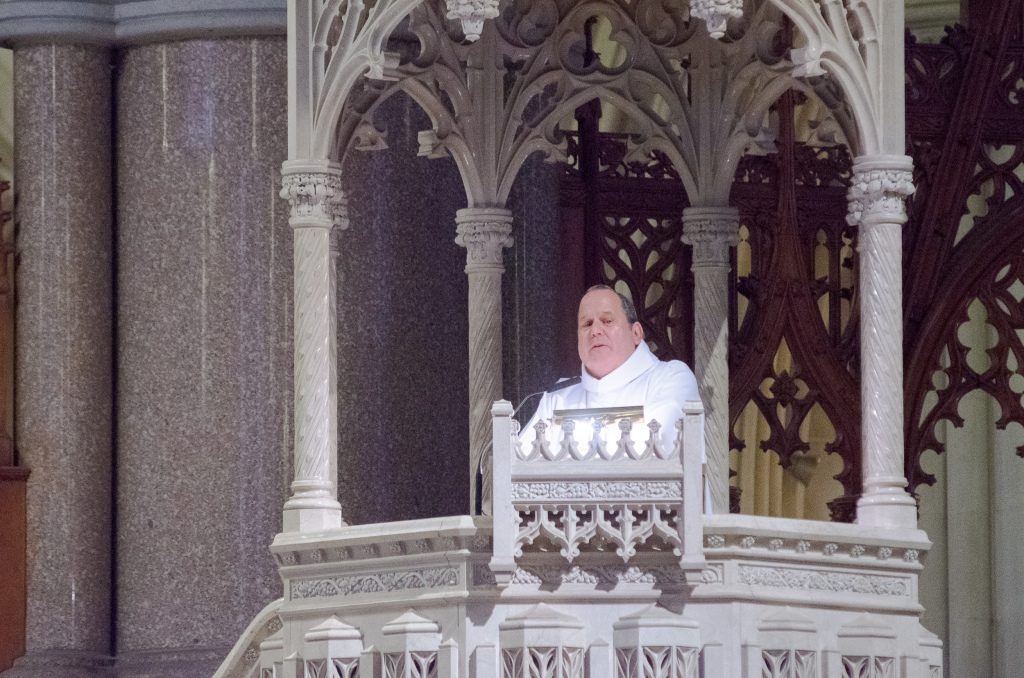 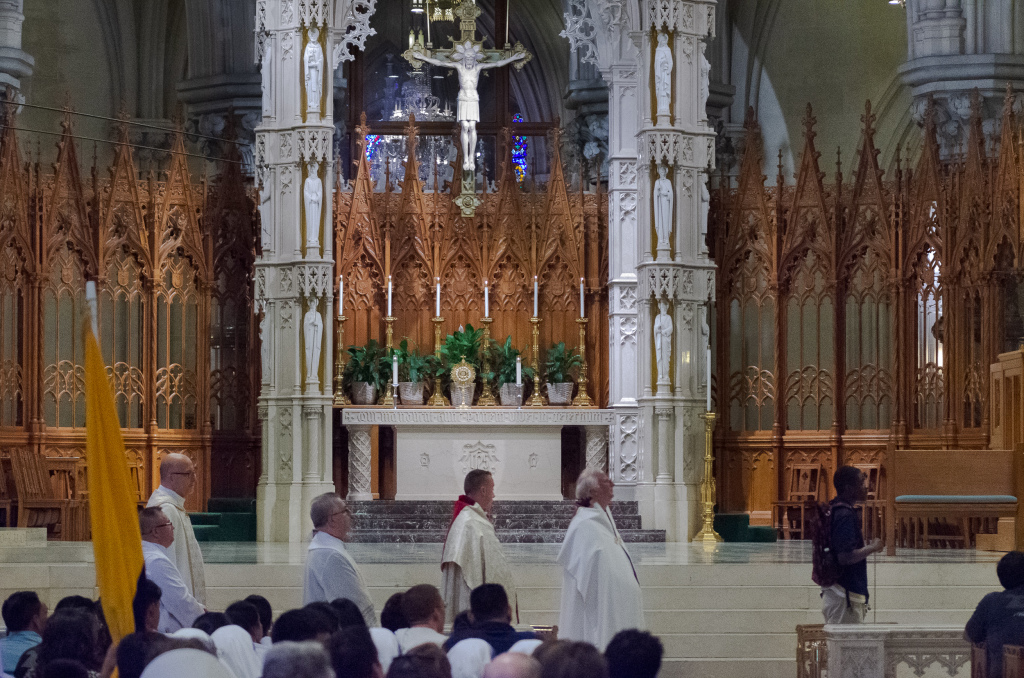 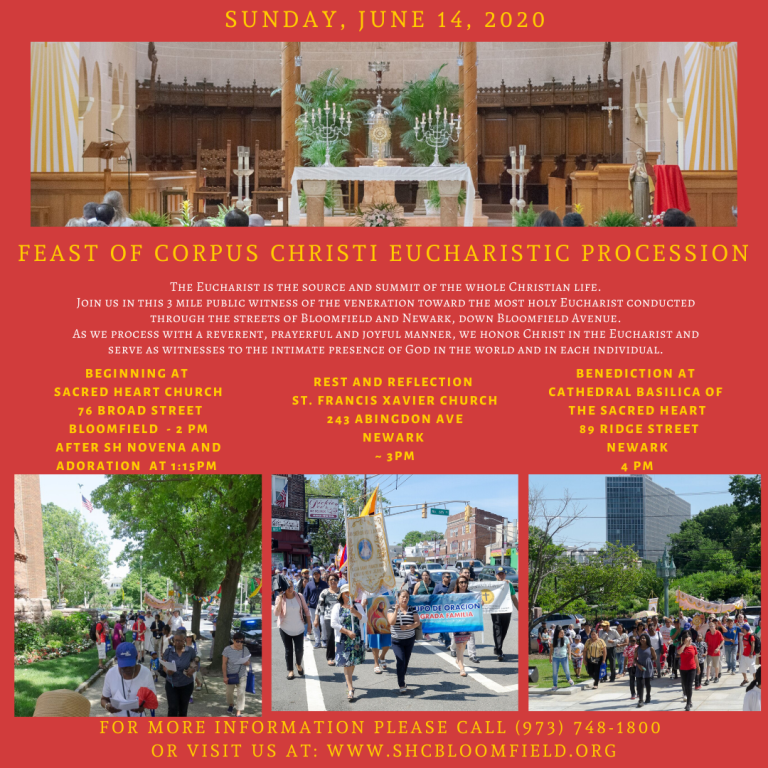